CoQ10 is another important ingredient that deteriorates as we age and, to increase your chances of getting pregnant you may want to take some extra of it (here is an example of CoQ10 supplement with good bioavailability).

There are plenty of websites explaining how CoQ10 is involved in energy production in nearly every process in the body; so, here I will focus only on the role of CoQ10 in fertility issues.

CoQ10 is increasing fertility by means of affecting the egg quality

How are CoQ10 and egg quality related?

First, imagine your egg cells as little plastic bags full of water. Under normal conditions, there is plenty of stuff swimming around in this water and some of it looks like grains of rice. Those ‘rice grains’ are the mitochondria.

Why mitochondria and CoQ10 are essential for egg quality

In healthy mitochondria, CoQ10 is a part of the system that produces the energy currency used by cells: ATP. These energy molecules are needed for EACH AND EVERY egg to function. You see now how CoQ10 and egg quality are related?

In terms of energy production, this means that such mitochondria become unable to fully support the costly biochemical reactions taking place in the egg. So, what you can do is provide the missing components yourself if you want your remaining eggs to be able to correctly ovulate, get fertilized, and support early embryonic development.

Imagine the following scenario: one of your eggs becomes fertilized. Did you know that, in the next few days, a young embryo will have no other source of energy apart from what comes from mom’s mitochondria (dad does not contribute any “food” at this point because, at the moment of conception, only the package of his naked DNA,  or genetic material was inserted into the egg).

Mom’s body works hard in this phase and increases the number of her mitochondria for several fold. However, if most of her mitochondria were damaged in the first place, early cell divisions (energetically very costly processes in which mom’s and dad’s chromosomes repeatedly align and separate) are likely to be impaired and embryo loss is likely to occur. And if you are trying to conceive for a longer time, or going through IVFs that repeatedly fail, this is exactly the scenario you want to avoid.

Why mitochondria and CoQ10 are essential for the egg’s environment 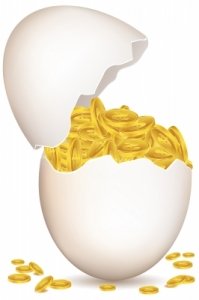 Quality of eggs changes as women age. Image courtesy of digitalart at FreeDigitalPhotos.net

The perspective of looking at early fertilization processes less from a mechanistic and more from an energetic point of view has brought a whole new twist in the field of fertility research.

In its simplified form, here is why:

Until recently, woman’s eggs were viewed somewhat as those kitchen cook-timers, set at a certain period of time (about 40 years) and then decaying or becoming useless after this time was over. In addition to being psychologically devastating, this vision turns out to be plain not true. The last decades of intense research in artificial reproductive technologies and manipulating cells in the lab have helped us arrive at the more realistic picture.

This picture shows that it is not only the eggs that are to blame. Actually, it is the “tired” and burned out environment in and around the egg that seems to be the big challenge. This means that mitochondria from the neighboring tissues (ovaries, tubes, uterus) also seem not to possess sufficient energy to support early embryonic development. Luckily, with proper supplementing of the missing components over several months’ time, it is possible to improve these prospects in some women.

Would you like to talk to me or find out what I think of your fertility journey? You can meet me on Skype or send me an email!

At the end of 2009, a clinical trial was initiated at the Toronto Center for Advanced Reproductive Technology, to test the efficiency of CoQ10 supplementation together with fertility drugs on pregnancy outcomes in older women (age 35–43 years). Unfortunately, this “randomized, placebo-controlled” trial failed to be completed. A good study design requires proper controls, meaning that, in addition to women who would receive CoQ10, an equal number of volunteers were needed to risk getting only an empty placebo pill over several months – no wonder that, in the age group where women have no time to lose, it was difficult to recruit participants. But the good news is that research in the area of improving egg quality is making progress, and that CoQ10 supplementation is making its way into clinical practice, giving hope not only to those whose ovarian reserve is diminishing due to advancing age, but also to women in general (Bentov Y. et al., 2010).

By the way, there are more compounds than CoQ10 which can improve your egg mitochondrial status, such as alpha lipoic acid, resveratrol, acetyl L-carnitine, and various plant antioxidants. However, research on their exact effects on the ovarian tissues is still in its infancy and I will do my best to let you know if some exciting data come out in the future.

Scientific reports on CoQ10 and fertility: