Grains and getting pregnant 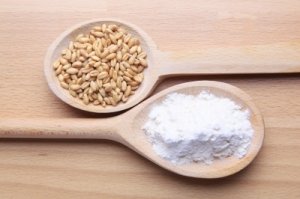 Basically, it’s easy to explain why grain and cereals aren’t really ideal for humans. The kernel is a seed (future baby plant!), which has evolved over millions of years to transport, protect, feed, and defend the vibrant, new life that it carries in itself.
The corn kernel is full of carbohydrates so that this seed can survive in different environments and grow into a new plant.

We like eating this carbohydrate very much even though it’s really only composed of a simple sugar that serves to feed a young sprout until it has developed its own roots and nutrition system. On the other hand, the corn is full of proteins such as gluten, leptin, and many others that make the corn content sticky and hard to digest and cause allergies in many people. So, what was good for us in the beginning because it increased the reproduction rate of humans (fast access to high-calorie carbohydrates), today has the opposite effect on our health (in some countries, for generations, way over 70 percent of nourishment comes from grain products).

Another novelty which humans have obtained upon searching for safety and abundance was livestock breeding. This cooperation between human and animal had a fair character in the beginning: The human took the animal’s freedom, its milk, eggs, and finally, its life; in return, the animal received the human’s care and safety, including food, water, and nurture, as well as the possibility to breed in peace and security. The wilderness couldn’t guarantee that. At least in the beginning, the profit was large on both sides.

So what is now diffferent

As if all of these “novelties” weren’t intense and fast enough for our bodies, a phenomenon arose in the last hundred years that cannot be compared with any other: industrial food production. We were once hunters and gatherers and had direct contact to everything we ate. Then we turned into farmers with slightly different calorie proportions and now we are modern humans and know neither how or where our food originates, or what it’s made of.

And in the same way the human lost its direct contact to his nourishment, it has also lost its own biological and evolutionary continuum.

Fruits and vegetables mostly come from radiant, mile long conservatories in which light and moisture influx as well as the fertile soil are controlled.

Hundreds of types of foods that humans once ate are now reduced to only a few, mostly genetically manipulated varieties.

Animals, which used to be able to roam around, eat, and breed freely, now live in confined places, which are inaccessible to people, where they lead short lives. Those are unnatural, overcrowded, brutal, and bizarre places, which reflect a perverted renunciation of nature. The meat of these animals tastes like only meat can taste that is solely a product of a painful, unnatural, often also sick life, full of medication and hormones. It’s a poor reflection of what the human, as a consumer, wants to buy in a store.

Food acquisition in the supermarket today is common. It seems unbelievable that the first European supermarket only opened up in the middle of the last century in England. The human separated himself from his nourishment, quickly, and without taking a look back.

Parallel to these processes, many diseases of civilization have found their way into the life of the modern human.Cardiovascular diseases, diabetes, autoimmune disorders, diseases of the respiratory tract, and food allergies are all diseases considered to be common ailments today.

Yet, with our minds and bodies forced to exist beyond the boundaries of the evolutionary and metabolic continuum they were adapted to, who can be surprised with an explosion of disorders such as endometriosis, PCOS, or unexplained infertility?