How often should couples have intercourse when trying to conceive?

How often should couples have intercourse when trying to conceive? 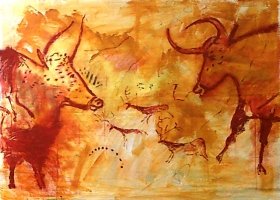 Artwork by Nico at the Paleo Conference in Berlin

The longer a couple tries unsuccessfully to conceive a baby, the more pressure and anxiety typically infiltrate into their sex life.

Some will manage better to keep these feelings under control, but after a certain time almost all couples are asking themselves questions such as:

Why are we not getting pregnant?

How often should we have sex?

What are the best positions to get pregnant?

Are we a good match? Is it still fun?

Things we can learn from the sexual habits of our ancestors

I’d say, let’s turn back to our ancestors and see whether there is any wisdom we can borrow. After all, they did not have too many other entertainment options and should be experts on this.

In spite of the importance of the topic, only a few systematic studies exist on the sexual behavior of hunter–gatherers, and most are based on research on the few remaining tribes living in central Africa.

This detailed report (Sex and searching for children among Aka foragers and Ngandu farmers of central Africa: Hewlett & Hewlett, 2010) I found particularly interesting. Here is a short summary:

Several parameters, such as 1) reasons for having sex, 2) frequency of sex per night, and 3) sexual beliefs and practices were examined in the adults from the Aka and Ngandu tribes. This is a well-known research cohort, living in central Africa and who have a lifestyle that closely resembles the way humans lived throughout most of our evolutionary past.

Interviews conducted with married adults aged 18–45 revealed that, on average, people from both tribes (who otherwise belong to different ethnic groups) have sex two to three times a week, often with more than one orgasm per night. Age did not have much impact on the frequency of sex (but here one must consider the relatively early age at which they get married).

What fascinated me most was that, when asked about the reasons for having sex, it was the men in both tribes who emphasized their desire for children.

Sex was seen as a pleasurable activity connected with getting pregnant, but also as an activity requiring some effort. Some compared it to finding food during the day, only easier, as one could take naps in between. One of the words men used for sex translates as “finding children” and when asked more about their reasons for having intercourse, they invariably stressed the importance of becoming fathers.

On average, those men climaxed about 2 times per night and then had 2–3 nights without any sexual activity, which would correspond well with the time actually needed for sperm to regenerate.

After ovulation, the egg can be fertilized for only about 12-24 hours. If you’re wrong about ovulation, you’ll have to wait to try again the next month. Because sperm can live for 2-5 days, having sex in the few days leading up to ovulation will increase your chances of getting pregnant.

Sexual behaviour of our ancestors is interesting, but what does it mean for us today?

Maybe an important insight on how, without any theoretical knowledge behind making babies, these people correctly did things the way that best suited both their physiology and their lifestyle.

Maybe we could adopt more of their spontaneity?

Those of you who are trying to conceive for a longer time can remember that the next time you face a following situation:

After days of hoping and waiting, your ovulation test finally shows a second stripe. Hurray! You have about 24 hours to make your next intercourse happen!

But what if your partner is not in the mood?

Is not at home?

If you end up having an argument with him on that night?

How cool is that for a relationship that tasted so different before the baby project?

As hard as it seems, you really have no other way but to relax and disconnect from your own racing mind for a moment.

Find the technique that works best for you and please remember our ancestors for a moment: not to think and not to know too much is sometimes the best strategy to have.

Children are out there and you just have to continue searching for them. And it is OK even if you have to put some effort into achieving that wonderful goal.